Lyudmila Pavlichenko was the most talented and successful female sniper in history. She fought for the Soviet Union’s Red Army during World War II. On the battlefield, she killed 309 German soldiers and earned the sobriquet ‘Lady Death’. In her later years, Pavlichenko toured North America, Britain, and met with the wife of the US president’s wife Eleanor Roosevelt.

Lyudmila Pavlichenko was born in 1916 in Ukraine. She joined the shooting club in her teenage and she also worked in an arms factory. At the age of 16, she got married and gave birth to her son. The marriage was ended after a few years, and after the divorce, Pavlichenko went on to complete her study at Kyiv University. In 1937, she enrolled in a snipper school. During World War II, when German forces invaded the Soviet Union, Pavlichenko, left her studies and volunteered for the Red Army.

When Pavlichenko, joined the Soviet Army, the leaders initially wanted her to be a nurse. At that time, women in the military were largely relegated to support roles. After seeing her skills, they finally let her in the army as a sniper. She became one of the 2,000 female snipers in the Red Army. However, a lack of guns meant that she at first helped dig trenches instead. During the fight, his colleague was wounded by a shell splinter and he passed his rifle to her and she shot Romanian soldiers a quarter-mile away.

The only feeling I have is the great satisfaction a hunter feels who has killed a beast of prey.

She killed hundreds of enemy combatants in Odesa, Moldavia, and Sevastopol. The Germans tried to turn her against her country and promised the officer rank in the German Army, however, she refused the offer. They also threatened her.

If we catch you, we will tear you into 309 pieces and scatter them to the winds!

During the war, she was promoted to sergeant upon confirmation of reaching 100 kills second to Lieutenant when the tally went upwards of 200. In the summer of 1942, shrapnel wounded her face and she was assigned to train novice snipers. She was also given another role: wartime propagandist. She was sent to Canada, the U.S., and Great Britain to gather support for the Red Army against the German forces. She also visited the White House, where she met with President Franklin Roosevelt and the First Lady, Eleanor Roosevelt.

The American people and press, asked stupid questions about her physical appearances, instead of about her skills. Reporters questioned her hairstyles, nail polish, and makeup. She told the interviewer.

I am amazed at the kind of questions put to me by the women press correspondents in Washington. Don’t they know there is a war? They asked me silly questions such as do I use powder and rouge and nail polish and do I curl my hair? One reporter even criticized the length of the skirt of my uniform, saying that in America women wear shorter skirts and besides my uniform made me look fat. This made me angry. I wear my uniform with honor. It has the Order of Lenin on it. It has been covered with blood in battle. It is plain to see that with American women what is important is whether they wear silk underwear under their uniforms. What the uniform stands for, they have yet to learn.

Comparing gender equality in the U.S. and Soviet Union, Pavlichenko told the public that:

After touring Canada, Britain, and the United States, she eventually returned to the Soviet Union to continue training other snipers.

Pavlichenko earned her history degree from Kyiv University after the war was ended. She continued training the snipers and worked as a historian for the Soviet Navy. In 1957, when Eleanor Roosevelt visited Moscow, she also met Pavlichenko.

Pavlichenko suffered from PTSD and alcoholism and she struggled constantly with depression, due to the loss of her husband in the war.

Lyudmila Pavlichenko died from a stroke on 10 October 1974 at age 58. She was buried next to her son in Novodevichy Cemetery in Moscow. The Soviet Union honored her with multiple medals and two postage stamps. 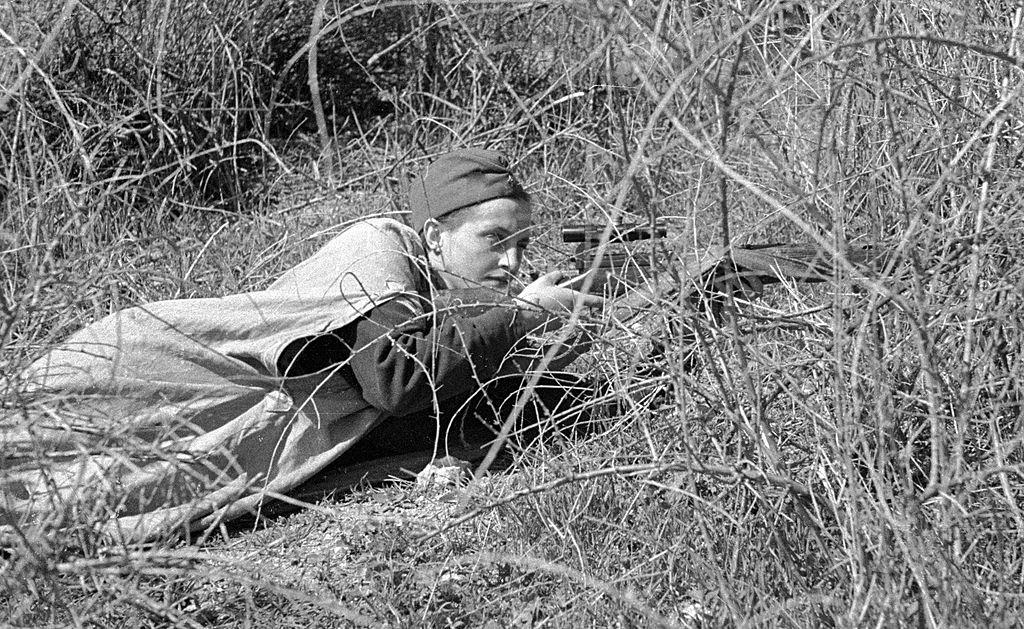